Crater Lake- We finally made it to Oregon

Stuttering and stumbling. Nervous and frustrated. But we are rolling. That is vanlife in a rusty, old Volkswagen bus. You’re just waiting for the next thing to happen. And all that is left to do is hoping that it happens somewhere kinda nice. 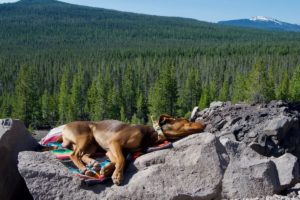 And so we made our way inland through the huge redwood trees of northern California. The air smelled like hot summer days and several nights in a row we were lucky enough to make camp somewhere in the woods along beautiful wild rivers. And as we continued north the landscape became greener and wilder until we could finally see the snow-covered mountain peaks of Oregon on the horizon. Through deep green forests and lonely stretches of wilderness we climbed up high into the mountains surrounding Crater Lake. 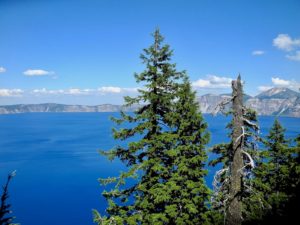 And than there it was. Bluer than the bluest sky. Majestic and impressive. Breathtaking.
Snow still covered the shoreline and huge pines competed with rocky mountains surrounding this water filled volcanic crater. For a while all four of us stood there with amazement. Overwhelmed by this raw beauty of Crater Lake and by that rusty, old van which after all brought us here. Finally we sat down at the edge with some cold Chili from the day before and dipped bread in the pot while chipmunks were dancing around our feet.
After all a pretty damn good life I guess…

See you on the open road one day

If a Van happens- A weird Solution We made a mistake…