Counting breakdowns on our first tour with the van

Done! Finally ready for our first tour with the van. All our belongings stuffed in that rusty, old van. Sweet. Let’s go.

Sunday morning before sunrise we started driving. Everything worked out fine at first, the engine was running smoothly and we were confident to reach Mazatlan at the Pacific long before sunset… 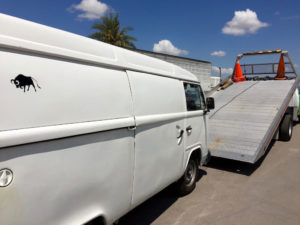 So much for that. 300 miles later our control started blinking. Apparently our battery was empty. How did that happen? What to do? Just than our rusty, old van decided for us and killed the engine. Some belt was snapped and the engine completely overheated. With a smoking engine and just miles from the dangerous city of Torreon we panicked quite a little. 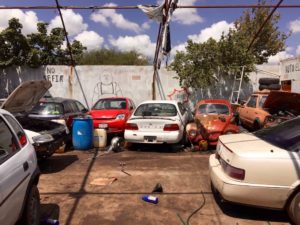 Luckily Peter once read of some Mexican service called ‘Los angeles verdes‘ or the green angels. Yet without any believes in their existence we dialed (074 and 078) and just 15 minutes later our rusty, old van was towed into a small town near by. Matamoros. Incredible boring, dusty and hot. Still hopping to leave this one-horse town in the afternoon it hit us pretty hard when the mechanic told us that we had to wait days for the spare parts.

What the hell! Where can the four of us sleep? Matamoros has no motels, hotels or hostels.
After one hot night in the packed van with no room and lots of mosquitos our helpful mechanic offered us an empty, old warehouse.

The next few days nothing happened. As we already know the working pace is rather slow in Mexico. Peter and I slept on a woolen blanket on the dusty floor. And we started to read us crime novels. For hours and hours on end. In between the frustration got hold of us. And we dreamed about selling our van. Just to get away from here. 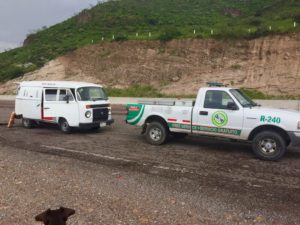 When we finally left Matamoros 8 days later the engine was synchronized badly. And our first tour with the van we broke down another 80 miles later. Three more days at some other garage and three more nights in the crowded van followed. 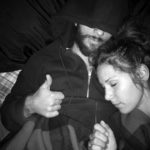 The Thing The plan