The thing with bureaucracy

Well here’s the thing: Organizing bureaucratic stuff in Mexico is a quiet questionable hassle. Useless it seems you are sent from A to B to C to get to B to A and than all the way to D and again to A. And everything once again… for fun…I guess… In between it’s almost certain that you will forget where you need to go next. And why. Yet as we would need that touristic permit to travel Mexico we had to go anyways.

Receiving a touristic permit to travel Mexico apparently requires you to leave Mexico and enter again. Luckily with only 250 km to the closest border crossing it meant spending no more than one day in total. So we thought.

While entering the border office the first thing we saw was a fully dressed soldier sitting in an old garden chair. Additionally on a fragile camping table in front of him he had an old black and white television with some Latin Sitcom and the volume turned up all the way. The only other person in that room was an incredible old man behind a cracked glass panel. 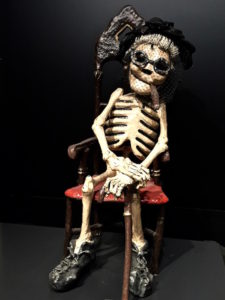 His first response to our request: “Hijole, un papel? De Tourismo? No hay aqui. No hay nada“. Basically:“Gosh a paper? For Tourists? We don’t have that here. We have nothing here“.

Perfect. Now that sounded very promising. Finally after several minutes of silence he decided to pick up the phone and call different numbers. All persons at the other end seemed to share the name Carmilita. And apparently Carmilita never heard of Germans crossing the border into Mexico and nobody seemed to have any clue what to do with us. Finally with shaking hands he scribbled a name of a far city on a tiny piece of paper. We should be able to find an office somewhere on the road to that City he explained.

Roughly 250 km inland and only through desolated desert it seemed hard to imagine. In disbelieve we were on our way to the next border crossing instead and entered a slightly bigger office. In here they actually knew about the paper. Yet as we didn’t carry enough cash for some weird fee they as well told us about that weird place in the heart of the desert. Apparently the only office where you could pay with credit cards. Driving there just proofed what we suspected anyways. 250 km from the border ain’t no office nor a house or a shack and we still don’t have the right paper.